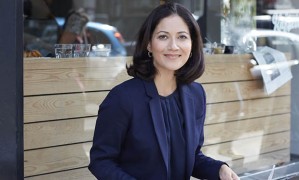 Being a mother of three little sons born just 18 months apart has not diminished London-based Mishal Husain’s passion for world news and bringing out hard-hitting TV shows. The face of BBC World News for the past 10 years, first as a business news presenter, and then on the main international news, Husain has profiled many high-profile figures – from Paul Wolfowitz to Paul McCartney, from Binjamin Netanyahu to Saif Ali Khan – and fronted key programmes on BBC.

Born to expatriate Pakistani parents in Britain in 1973, Husain grew up in Abu Dhabi, UAE. She later studied at a boarding school in Britain, and then read law at Cambridge University. She completed her Master’s in Law at the European University Institute in Florence.

Named by The Times as one of the five most influential Muslim women in the UK, Husain talks about her personal journey and her new show, Mishal Husain Meets.

From political revolutions to royal weddings, you’ve covered various momentous events in recent world history. What impacted you the most personally?

That’s a difficult one because so many events and people I have met along the way have had a lasting impact. I reported from New York in the immediate aftermath of 9/11 and I will never forget the flags draped from almost every window and pictures of the missing stuck to the walls. Then during the Arab Spring, I felt privileged to watch lines of Egyptians patiently waiting to get into Tahrir Square and protest, and being able to hear them articulate their hopes and dreams publically, often for the first time in their lives. And then this summer, meeting one inspirational Olympian after another – every one of them a testament to hard work and dedication.

Having been with BBC for 14 years, what would you say are the kind of shows and changes the organization has invested in to stay relevant and with-the-times?

During my time here the biggest change has been the growth of the BBC website into the treasure trove of material it carries today. For big events we set up live pages which include incoming news from our correspondents, plus what others are saying on Twitter and links to the background pieces. I use the site as a vital journalistic resource because I can be sure of the veracity of what I find there – and it’s also useful to take the pulse of the audience – you can see for instance which stories are being read and shared by people in different regions. I also value the way the BBC has embraced social media. Facebook and Twitter have bridged what used to be a gap between the broadcaster and the news consumer – now I can share my own thoughts as never before and see what people are saying in reply.

After witnessing the aftermath of tragedies such as 9/11 or Benazir Bhutto’s assassination, how did you keep your faith in humanity and optimism alive?

In common with many people, I have found stories of suffering much harder to take since I became a mother. Today, when I see images from disaster or war zones, my heart goes out to those having to live through it with their children, and try and protect and care for them as best as they can. This year there have been many terrible scenes on the news from Syria, and you wouldn’t be human if you weren’t affected by seeing them and hearing those in the midst of them tell their stories. At the end of a day like that, I count my own blessings, and am grateful for the reminder to do that.

You and I share a childhood at around the same time in Abu Dhabi (of course, that kind of Abu Dhabi no longer exists!). How did that idyllic, conservative upbringing in a newly developing desert landscape influence you in your later years?

I wonder if our paths ever crossed? Wasn’t it a wonderful place to grow up – such a sheltered existence and you’re right, the old UAE is hard to find these days. I think expat life has had a profound influence on my later choices – my interest in international news, for instance, was definitely affected by having an international group of friends and hearing my parents discuss what was happening in the world. So I remember them talking about Anwar Sadat’s assassination in 1981 and then Indira Gandhi’s in 1984. And as members of a diaspora community they were avid news consumers, even though there were precious few news sources at the time. BBC World Service radio was big in our family and I felt particularly honoured the first time I presented one of its programmes. (By the way the old UAE is still there in the smaller Emirates like Fujairah – I wrote a travel piece a couple of years ago about re-visiting the place where we used to camp when I was a child, and the eastern coast is still relatively unspoilt)

You reported for a Pakistani newspaper in your late teens. How different was it from the Pakistani media scene now?

Yes, one of my first ever stints of media work experience was as an intern at The News, then edited by Dr Maleeha Lodhi, who later became one of Pakistan’s most successful diplomats. I was assigned to the local news pages and covering events around Rawalpindi and Islamabad. I was only 18 but it was great experience and of course seeing your by line for the first time is a wonderful feeling. Today the news landscape has mushroomed in Pakistan, especially with a plethora of TV channels and its good to see open debate about a wide range of subjects. And I love the space for humour and characters like Begum Nawazish and ‘her’ own unique, tongue-in-cheek style.

After studying law at Cambridge, how did the career switch to TV journalism come about?

I decided to read law at university because being Asian, my parents were very focused on vocational degrees and neither medicine nor law appealed! Having said that, parts of my law degree were fascinating, especially international law which is quite a significant part of my work in the newsroom today when we talk about conflicts, UN resolutions, war crimes cases, refugee flows and human rights in general. Somewhere during my second year at Cambridge though, I started looking at alternative future careers, and a friend had applied to the BBC for work experience. I started to wonder if I might have a chance of doing the same, and wrote to the BBC’s Legal Affairs Correspondent, who very kindly agreed to let me come in to shadow him. Today the BBC is much more organised with a proper work experience scheme which gives many of our future journalists their first glimpse of what the newsroom is like.

Being a Muslim woman, did you ever have to face social or cultural restrictions to your decisions or actions in any high-stress situation?

I always try to be mindful of social mores and traditions wherever I am in the world, but I have never felt my gender has held me back. In many places it has helped me as I have been able to talk to and bond with other women and learn more about the environment or society I am reporting on.

How do you manage to balance work with a demanding family life and three little sons?

Sometimes it’s not an easy balance! I feel lucky to have three healthy children and a job I love, so there’s nothing to complain about, but the logistics can get challenging. I had three children within 18 months so had my hands (literally) full on the baby front, but as they grow older it’s trickier in some ways because I want to be there as much as possible to help and witness their little minds grow and flourish. Time and attention is the most valuable gift any busy parent can give their child – and often the most difficult. My boys are very interested in the world around them so when I travel they look up the countries I am going to and that helps pique their interest and cushion my absence a little.

What was the lasting impression that stayed with you after interviewing ballet-dancer-turned-stockbroker Li Cunxin on Mishal Husain Meets?

Li is an amazing person on every level and a real testament to the power of hard work. His is a classic rags to riches story and there is an extra dimension in that even when he had made it as a top ballet dancer in Australia, he studied at night and taught himself about finance so he could go on to a second successful career as a stockbroker. I asked him about his early life and why he made an effort to impress the ballet scouts who came to his school when he didn’t even know what ballet was. His answer stays with me – he said he knew that somehow they represented something better than the hunger he was experiencing in his childhood. I thought of Li again this summer when I interviewed the US Olympian Lopez Lomong, who was born into poverty in Sudan and told me he started running to distract himself from hunger.  Chilling and humbling.

How was your experience meeting the other guests on the show?

All of them brought something unique and I loved having the scope to talk to people at length about their trials and tribulations, their ups and downs. The one theme that linked them all was how hard they had laboured in their chosen field, and how often they had picked themselves up and tried again. In some cases, their relationships had paid the price, in others they had had wonderful support from their families, with the father of Sana Mir, captain of Pakistan’s women’s cricketers telling her when she dropped out of her engineering degree: ‘Pakistan has plenty of engineers but very few women cricketers.’

What’s your favourite holiday destination in the world?

Now that’s very difficult to answer! I have a soft spot for Langkawi in Malaysia as that’s where we went on our honeymoon, but I also love New York for a city break and Italy for history and wonderful cuisine, especially Capri and also the Lakes. I’m looking forward to taking my sons on the kind of fishing holiday I used to have in the mountains of northern Pakistan as a child, and one day I would love to visit my grandparents old homes in India – they came from Lucknow and Aligarh.

How do you de-stress?

Usually by getting an early night. But I do also like cycling and am getting a bike as a post Games tribute to the Olympians – I am hoping riding it in London is a stress relieving rather than enhancing experience.