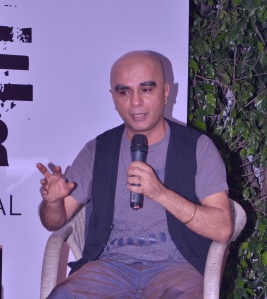 “I’ve never been just a journalist,” says Minty Tejpal, blowing away a puff of smoke at his parents’ New Delhi apartment. “Besides, journalism today bores me. Besides Tehelka – which is a bit incestuous considering my brother and sister work there – I don’t really find anything in journalism interesting any more.” This, coming from a prolific television and print journalist who was one of the co-founders of Tehelka, a reporter at the popular video newsmagazine Newstrack and later a film critic for the Mumbai Mirror.

Born Kunwarjit Tejpal, the 45-year-old has much more than journalism on his mind today anyway. Having written scripts for films and TV shows – the closest to his heart being the 92-minute feature film made for TV, Kaam Ka Plot, which will be screening at the New Jersey South Asian Independent Film Festival this month – Tejpal has also been an ad copywriter, an executive producer for Channel V, and the ‘discoverer’ of talents like Rabbi Shergil. “I’ve got ants in my pants,” he says, moving around every few minutes, getting water or fixing the windows, finally sitting on the floor with his ashtray, his sentences peppered with Punjabi cuss words. “I love words and ideas,” he says, lamenting that today’s youngsters have all the digital tools of communication in the world and yet have nothing to communicate. “I ask them, do you have anything to say? If not, shut the fuck up.”

“I’d always thought I’d write a book when I had something to say,” he goes on, referencing his first book The Last Love Letter (Hachette), a work of fiction that had drawn much from his personal life. Twice divorced, with two children (now aged nine and five) from his second marriage, Tejpal wears his wounds on his sleeve. “The most difficult moment in my life was the realization that I had screwed up badly,” he says of his second divorce and losing custody of his kids. “It’s taken three-four years to process it. And the happiest moment was meeting them after a gap of nine months and bonding instantly.” Despite living in Mumbai, while the kids live in Delhi, Tejpal says he’s trying to work on being as good a father to them as his parents were for him. “I was told I could be anything; I was encouraged to fly,” he says, adding that his brother, Tarun Tejpal, editor of Tehelka, was his biggest support when it came to testing the boundaries of how far he could go in his professional life. He admits his two marriages have taught him to let go of expectations in any relationship, lessons that have served him in his friendships as well.

Tejpal’s friendship was excruciatingly tested in 1993, when he was involved in a major car crash in Delhi, which led to the death of his closest friend and left him with a cracked skull. After a major surgery, he was left with a permanent scar on his forehead, and decided to go bald in the young woman’s memory. “I’ve tried everything when it comes to healing – babas, tantrics, meditation, drugs, abstinence, yoga… I gave up drinking for a few years. I was vegetarian for a while. Isha yoga has helped me hugely. After sex, I think yoga is the best thing in the world. Sex is right up there, though,” he says in all seriousness. He’s also now very fond of golf: “It’s the most individual game in the world. There’s a sexual angle to it you know, the ball and the stick and the hole.”

He stands up and perches himself on the sofa arm. What will his epitaph say, I ask? He looks up in silence for a moment. “’He laughed and swore his way through life’,” he states, quickly adding, “I only use swear words if I’m comfortable with you. Behenchod Punjabi hoon na (I’m Punjabi after all).”

First published in the October 2012 issue of Atelier