Over two years ago, Noor Arora came across a notebook that once belonged to her great grandmother. It listed nature-based formulas and homeopathic remedies for a variety of ailments. Freshly graduated in industrial design from Parsons in New York, Arora began making concoctions listed in the book to help her grandmother, who had suffered deep pigmentation after many months of radiation therapy.

Arora also had a more personal motive – having returned to Delhi after four and a half years, her skin had broken out in protest and she had chronic acne and scarring. So well did her great-grandmother’s formulae work that Arora’s friends and family demanded a share of her lotions too.

Curious to understand how plants and herbs interact with the human body and are absorbed into the skin, Arora collaborated with a biochemist from Pittsburgh University to develop a new line of plant-based, vegan skincare products that she launched this year as First Water Solutions. Now supplying to over 300 private clients in Delhi, the line includes serums, face oils, gels and body mists for all ages, priced from Rs 400 to 1100.

Interestingly, the range is practically edible as only food-grade preservatives are used. “Our ingredients are ethically sourced from farms across the country; we do not test on animals, and the products contain no chemicals. Why feed your skin what you won’t eat?” the 25-year-old reasons.

Arora is the latest entrant in India’s nature-based skincare industry that has shown a promising boom of late. A new breed of beauty brands has cropped up to cater to a target audience that has two unique traits. The first is our cultural preference for kitchen remedies and ‘dadima ke nuske’ (grandma’s prescriptions) for all beauty woes ranging from falling hair to under-eye circles.

This is due in part to our rich history of Ayurveda and traditional therapies that are a seamless, mainstreamed part of health solutions in India.

The second is the urban Indian’s acclimatization to FMCG, off-the-counter beauty products that are affordably priced, easy to use and widely available, thanks to a flourishing personal-care industry estimated at Rs. 74,700 crore by retail sales value, which has been expanding at 13 percent year-on-year.

The millennial buyer wants the best of both worlds – traditional beauty remedies along with modern convenience. And brands are standing up to the challenge.

For a long time, there was just one well-known player, the pioneer in Indian beauty, Shahnaz Husain, followed in the early 1990s by Biotique and Blossom Kochhar. The three quickly dominated the salons and hospitality space. In the early 2000s came beauty labels such as Kama Ayurveda and Forest Essentials, who placed themselves in the luxury category and retailed from high-end malls and upmarket shopping complexes around India.

This handful of companies had the playing field all to themselves for several years, until Baba Ramdev’s Patanjali came along and completely disrupted the market with low-priced nature-based beauty products that claimed similar results. While Patanjali managed to create a new user base for such products among the rural and lower-income segments, it left a huge gap in the market for the aspirational urban Indian who wanted something with a more legitimate pedigree but without the ‘luxury’ price tag.

And suddenly, in the past few years, the Indian beauty industry came of age. 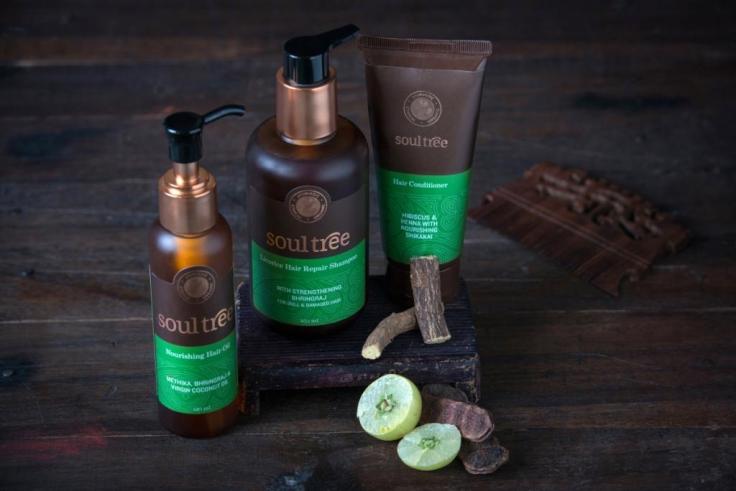 It has attracted a motley crew to steer it. One of them, Vishal Bhandari, was an officer in the merchant navy before he felt the desire to contribute more to the planet and to society. After years of working with farmers to promote organic farming in Uttarakhand, he decided it would be more fruitful to connect them to the global market.

That’s when he came up with the idea of SoulTree, India’s first range of natural products to be certified by BDIH, a German body that is the world pioneer in establishing standards for natural cosmetics. Starting off in 2013 with a 25-year-old chemist and a 75-year-old vaidya (Ayurvedic doctor), the firm now works with over 3,000 farms, and has its own processing and manufacturing units.

It took over two years for Bhandari’s team to develop natural personal-care products that were free from harmful synthetic ingredients like SLS/SLES, parabens, artificial colours and fragrances. With a range of about 35 skincare products and 30-odd cosmetics, the brand first began retailing in “mature” markets like Europe, North America, Middle East and Oceania, and incorporated feedback from foreign buyers before launching in India, where it now retails from online stores such as Amazon and Nykaa.

Bhandari, 43, was keen to ensure a “long-term market for farmers” with SoulTree products, which are priced in the range of Rs 350 to 650. “We have been working for years to understand the challenges of farming in the hills. The idea is to create a sustainable livelihood and demand for organically grown herbs and plants, and incentivize organic farming,” says the Delhi-based eco-activist.

Not too far away, in Chandigarh, the 33-year-old scion of a contract manufacturing company that supplied natural ingredients to cosmetics majors took matters into his own hands, and launched a nature-based beauty brand with a unique approach. Arush Chopra, whose mother Dr Neena Chopra is an award-winning biochemist and naturopath, studied business and worked in London and Singapore before returning to India to launch Just Herbs three years ago.

India’s first beauty brand to “crowd-source” its products, they have involved customer feedback in product creation right from the idea stage through the formulation trials, and even the final packaging.

One example is their star product Herb Enriched Skin Tint – a makeup and skincare hybrid – which was the result of a Facebook poll with 450 users across India. They are now finding it hard to keep up with the demand. At present they have a range of about 65 products priced Rs 500 to 1800 that are retailed through their own e-store and other online marketplaces.

“We have adopted a customer-centric and a ‘bottom-up’ approach to product development in a conventional industry where most players follow the route of first creating trends through marketing and advertising and then offering products to sell to these ‘manufactured’ trends,” says Chopra, whose company saw 144% growth in the last fiscal.

Handmade in Mohali, Punjab, all the products are 98.2% to 100% natural, with a high concentration of certified organic ingredients. Based on demand from increasingly aware customers, the products do not contain sulphates, parabens, GMOs, bleaching agents, alcohol or any other carcinogenic or harsh chemicals.

“In fact, if there is a controversy around an ingredient, we will not use it!” says Chopra, who believes that any skincare or haircare product is only as good as the results it can bring about and that directly depends on the potency of the ingredients that go into it. Unable to find genuine extracts from raw-material suppliers, they began making them in-house using plant material, flowers and herbs collected from farms across India.

A similar realisation drove Shiv Singh Mann to launch his brand of jojoba oil, Desert Splendour. Established in 2006 with a single 120-acre jojoba plantation in Bikaner, Rajasthan, Mann spent over 10 years in developing a more potent yield to supply to international and Indian cosmetics giants, who found it cheaper to source from his farm rather than jojoba-exporters in South America. A few years ago, however, having wisened up to the potential in the Indian market and to the efficacy of his high-quality yield, the Cardiff University alumnus decided to retail pure jojoba oil directly to customers online.

Today, Mann’s is the largest private jojoba plantation in the country with another 100 acres added on in 2010. They continue to export about eight to 12 tonnes of oil worldwide every year, while also retailing under their label Desert Splendour to a growing number of Indians, especially women obsessed with selfie-ready complexions in an era of high-definition photography.

“Five years ago, no one knew about the skincare benefits of jojoba oil,” says Mann, 33, a former banker from UK whose family owns and leases farms across Punjab, UP and Rajasthan.

“But then international brands, and even Indian ones like Dabur who were sourcing from us, began talking about its benefits in their marketing, educating urban customers. This was an opportunity for us to step in and fill in the gap for those looking for pure, certified oil that has multiple uses.”

The oil can be applied directly on the skin and scalp, or can be used as a carrier oil for other ingredients.

Delhi-based Monisha Gupta, too, decided to tap into her family’s storehouse of Indian traditional beauty wisdom to promote to her international clientele. The founder of Craft House, which retails a vast range of Indian crafts and curios from the Metropolitan Hotel and Indira Gandhi International Airport’s T3 terminal, Gupta observed tourists seek good quality Ayurveda-based skincare while visiting India.

She commissioned her brother, who manufactures his own range of beauty products for the family-owned Metropolitan Spa, to create a new line especially for her audience. “NeoVeda is a modern-day, user-friendly adaptation of Ayurvedic treatments,” asserts the UK-educated Gupta, who employs mostly women and is fiercely proud of all things Indian. “The range is based on essential oils that permeate the skin easily to promote wellness without creating dependency,” she explains.

Gupta’s line of over 54 products includes creams, oils and soaps priced Rs 300 to 2300 that are based on Ayurvedic principles of vata, kapha and pitta, and contain no artificial ingredients.

Manufactured in the hills of Himachal Pradesh, NeoVeda ships over 70,000 units worldwide every year, including repeat orders from customers who are willing to pay four times as much in shipping charges.

Essential oils and holistic treatment also form the basis of Jhelum Loves, founded by Jhelum Biswas Bose. Daughter of a Kolkata-based aesthetician, Bose worked as beauty editor for a top Indian fashion magazine and marketing head for Sephora before launching her own brand of wellness beauty products in April 2016.

With an MPhil from JNU, Bose enrolled for a PhD in literature while also studying the healing philosophies of aromatherapy, chakra healing, crystal therapy and Bach flower remedies to solve her own emotional issues. 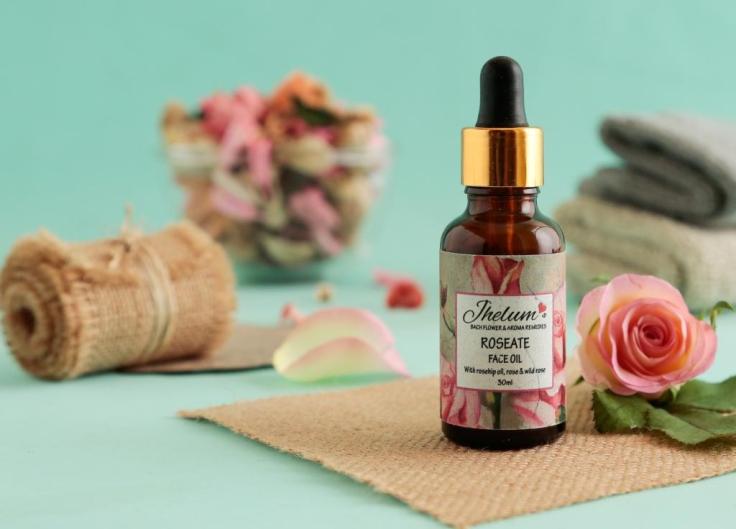 Noticing the resultant skin and hair benefits, the 37-year-old began making bespoke beauty oils to target the ‘emotions’ behind common beauty ailments for both men and women.

“You can only look your best if you feel your best. But people are inhibited in talking about their personal problems, so I’ve kept the application very simple,” says Bose, 37, who also conducts yoga sessions for better results. Besides oils, face mists and face washes in the price range of Rs 275 to 2100, Bose has launched a range of plant-based perfumes in roll-on format this month.

There are other popular players in the fray too – Plum, Ma Earth Botanicals, Just B Au Naturel, Pahadi Local, and PureSense, to name a few. Indeed, with homegrown brands offering international quality, the Indian beauty industry as it stands today is a buyer’s delight.

With soft uplifting aromas such as jasmine, sandalwood and rose, ancient healing benefits, promotion of farming communities, along with market-savvy branding, packaging and sensible price points, traditional healing wisdom in India has had a beauty makeover. The Indian customer can now have it all.

First published in The Economic Times