Amitabha Das is obsessed with dust. One of the biggest challenges in his role as director of operations at International Institute of Diamond Grading and Research (IIDGR) in Surat is keeping the state-of-the-art facility dust-free. “Every diamond that enters this lab is weighed up to six decimal points, and even the tiniest dust particle can alter the reading,” he says, adding that the level of technological sophistication here is “unmatched in the world.” Spread over 27,000 sq ft across two floors of the posh International Business Centre in the Gujarati town that cuts and finishes 75% of the world’s polished diamonds, the facility is owned by De Beers, the world’s largest diamond company. The bulk of IIDGR’s work is grading diamonds according to the punishing standards of Forevermark, the Oscars of polished diamonds.

Only 1% of the world’s diamonds can ever earn a Forevermark inscription. And this is where it is done.

Das heads a team of 94 gemologists at the 125-year-old diamond giant’s biggest and most advanced lab in the world, set up in 2014 with an investment of USD 16 million. IIDGR also has two more facilities in Maidenhead (UK) and Antwerp (Belgium), “but all new hardware is now being developed first keeping the Surat centre in mind,” says Das, who is excited about a new proprietary technology called AMS-2 by De Beers that can process up to 3600 stones per hour. “Our installed capacity is 350,000 Forevermark inscriptions and 250,000 grading reports a year,” says Das, adding, sadly, that the slump in demand for diamonds in India and worldwide has meant that they are operating at a far lower rate.

There are 36 processes that each diamond goes through from the time of ‘import’ into the institute, when it is given a computerised ID, to its exit from the facility with its grading report. “Everyone talks about the four Cs of diamond grading – cut, colour, clarity and carat weight – but we give you the fifth: confidence,” he says, pointing out the bullet-proof, programmed glass doors and enhanced security details at the facility. All visitors must wear lab coats and shoe covers. Only two courier companies are authorized to make deliveries. Employees cannot leave the facility during their work day, and have no information about the source of individual diamonds.

“The aim is not to minimize error but to eliminate error,” says grading standards manager Sandeep Pande, one of the first employees of Forevermark in Surat, who wanted to join the oil industry after his Master’s in geology, but found Surat’s diamonds equally lucrative. Each diamond goes through 17 steps of quality check both by advanced machines and expert human eyes, he says. The final step for the best diamonds is the lucrative Forevermark inscription, which – unlike other grading systems around the world – is done on the table of the diamond instead of the girdle. The unique number on the inscription, which is 1/5000th the thickness of a human hair and is visible only under a microscope, can be used to trace the history of the diamond.

“Initially, we had a rejection rate of 18%,” says business development manager Narayan Jariwala, 36, who was brought up in Surat and returned to join the diamond trade after his MBA. “But after educating the local diamantaires on how to identify better stones and how to polish them better, we have brought the rejection rate down to 6%.” 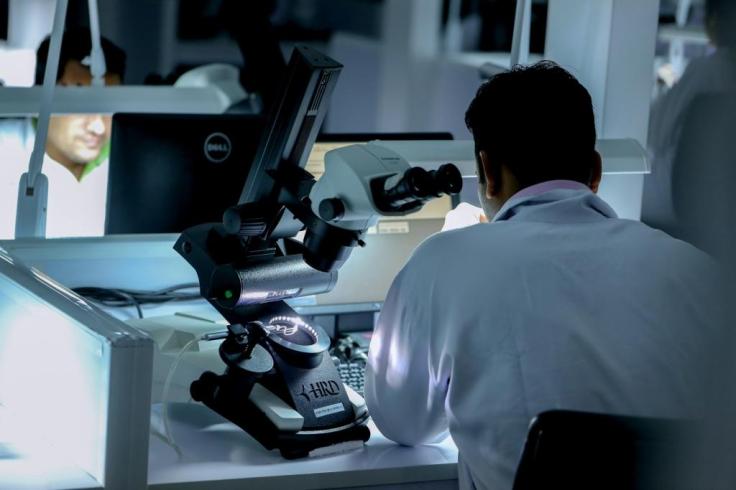 The local diamantaires he speaks about include the well-known Dholakia family, the owners of Hari Krishna Exports Pvt Ltd, at the vanguard of the diamond manufacturing trade in Surat. With 8500 employees across two sprawling facilities in Surat and several offices around the world, the 25-year-old firm rode out the past few difficult years of slowdown, and posted revenues of Rs 8000 crore last year with a year-on-year growth of 10%.

Last year, they gave way hundreds of cars, apartments and jewellery in loyalty bonuses to employees for Diwali. They also made headlines when they sent the seventh of the Dholakia brothers, 23-year-old Hitarth, to rough it for himself for a month in Hyderabad with just Rs 500 in his pocket. “It’s a family tradition to teach us the value of money before joining the business,” smiles Pintu Dholakia, the 32-year-old Harvard-educated CEO of the brand.

Hari Krishna Exports is one of 42 ‘Sightholders’ that De Beers works with in India, which means they must purchase a minimum amount of rough diamonds from the mining giant and adhere to its strict manufacturing standards, including certification of each piece. Most rough diamonds are imported from Botswana and Russia, and nearly 90% are exported once they are polished. “We process about 5 lakh diamonds per year,” says their compliance officer Sandip Sarvaiya.

It starts with Belgium-made mapping machines – each worth Rs 11 crore – making 3D projections of every rough diamond, which are used by technicians to ‘plan’ the cut of each piece on an in-house software. After two rounds of further editing by senior planners to maximize the output of each rock, the pieces are sent to the laser department where high-end imported machines cut along precise marks.

The shape of the diamond (round, oval, heart-shaped and so on) is decided based on the weekly market report sent out by global industry standard Rapaport. “The average education level of each employee is class 10,” says Sarvaiya, 32, who hails from Junagarh. “The head of the planning department only reached class 7 but he has visited 30 countries and is a world expert in diamonds. All one needs in this business are eyes, hands and, yes, a knack for the job.”

Later, the pieces go for polishing. “Everyone earns incentives,” says owner Dholakia, “based on how much of the rough diamond they can optimize.” The finished pieces are graded and then go to the head office in Mumbai where their fate is sealed: whether they go for sale in one of 82 world markets, or to Forevermark.

Considering that the final consumers of diamonds are mostly female – in fact, a study by De Beers this month found that women’s economic empowerment has helped spike demand for diamond jewellery – it is still a man’s world in Surat’s sparkling diamond industry. Of the 2200 staffers at Hari Krishna’s Varachha Road facility, there are merely eight women. At Forevermark’s world-class facility on Dumas Road, women make up only 10% of the diamond technologists.

“My international office has been pointing out my gender-diversity problem,” rues Das of IIDGR. “We even encourage the wives of our employees to design jewellery or participate in some way, but they don’t come forward,” says Dholakia of Hari Krishna. Both affirm that they would be happy to hire women if only more showed up.

It appears to be a social issue. Surat gained prominence as a diamond hub in the 1960s, when entrepreneurs from Saurashtra and north Gujarat, mostly Patels and Jains, converged here to take advantage of the nascent boom in the export of polished diamonds. The proximity to Mumbai helped, as did the economic reforms of 1991, and training and technology quickly put India on the world map.

By 2005, India was cutting and polishing 92% of the world’s diamonds, the bulk of which went to the US, followed by China and Russia. The population of Surat grew 55% from 2001 to 2011, and is currently estimated at 6 million, of which 1 million are employed in the diamond industry.

As economic indices rose, however, the sex ratio fell from 810 to 788 in the same period, the lowest in Gujarat, which in any case has one of the lowest sex ratios in India. A 2012 survey by ILO found only 12.2% women among all diamond factory workers in urban Gujarat. “That’s how our society is. Most women don’t apply for jobs,” says Surat-born Manthan Madrasi, 29, who completed his MBA from NMIMS and worked in Mumbai and Botswana before returning to his hometown to work in diamond manufacturing.

Luckily, the family behind the renowned BR Designs has no women problems. Husband-wife duo Bharti and Dilip Shah founded the jewellery brand 25 years ago, and their three daughters and one son are taking their legacy forward. Born in Jaipur, Dilip Shah moved to Surat in the mid-1970s. Their 35-year-old daughter Ridhi now designs every piece in the showroom, and both mother and daughter have won several awards for entrepreneurship and design. Their extravagant jewels are worn by some of the world’s best-known personalities.

It was when Ridhi decided she wanted BR Designs to be worn on Hollywood’s red carpet that her father looked toward IIDGR. “We needed something authentic, something that can match international jewellery standards and compete at the global level. So we tied up with Forevermark two years ago,” says the senior Shah, pointing at a section in their Athwalines store dedicated to Forevermark-certified jewellery. But while Ridhi’s ambition was achieved, Dilip is not too upbeat about Surat’s diamond industry in general. “It’s been one thing after another for the past couple of years – excise rates, demonetization, GST, strikes, dollar-rate fluctuations. We recover from one hit, and another one comes along.”

Diamond trader Siddharth Jain is even more anxious. Born in Bikaner, the 26-year-old claims to be the last young Jain to learn the ropes of the diamond brokering business in Surat, where over Rs 700 crore worth of rough and polished diamonds are traded every day. “The diamond market is deserted. Young people are now moving into the textile industry,” he claims. His eyes move restlessly to his phone, awaiting news of a fellow Jain diamond broker who had been brutally beaten up in the market just hours earlier, due to which all shops are closed in protest. Jain talks regretfully about the frequent bandhs in the market, including one in June after GST of 3% was announced on polished diamonds and 18% on diamond trading.

A 46-year-old diamond merchant committed suicide this July after facing deep losses, and in August, two Gujarati diamond firms failed to repay loans worth Rs 900 crore, sending the market into a tizzy. Luxury car showrooms, top-end fashion brands, large department stores and fancy malls abound in Surat, but they lie empty during weekdays. “All the major global trade has gone into the hands of the bigger players,” Jain complains, adding that Surat’s 2000 small-time merchants and 5000 brokers are at the mercy of the domestic diamond market, which is in a shambles.

But Jain has hope. “Narendra Modi will fix everything,” he says. In the meantime, the world’s luxury seekers keep Surat’s diamond-makers busy. The glow must go on.

First published in The Economic Times

One thought on “The Life of a 1% Diamond”