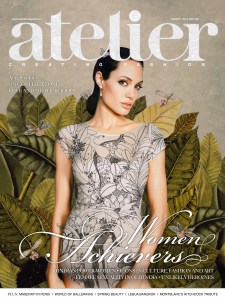 It’s not about her wild youth, the drugs, the shortlived marriages, the charges of being a home-wrecker and her admitted bisexuality. It’s not even about her award-winning, unforgettable performances in films such as Changeling, Girl, Interrupted and A Mighty Heart, and her stirring directorial debut. It’s not her adoption of kids from around the world, her humanitarian drive and her unconventional relationship with one of the world’s most successful actors. What makes our cover girl Angelina Jolie relevant to today’s generation of women, struggling with the after-effects of last century’s feminism, is the fact that she has managed to stay all-woman, to uphold and even glamorise the feminine aspects of nurturing, cooperation and motherhood, while negotiating her way to the top. Not for her the sacrifice of family to pursue her passions, nor the crude drive to amass millions and sit back. Jolie has been out there equally with her professional excellence, her personal vulnerability and her compassion.

The Tomb Raider superstar hasn’t merely lived life on her own terms; she has redefined the very concept of success when it comes to women. Not many years ago, marrying, and staying married to, a wealthy man was a grand career option and a safe exit strategy for an ‘ageing’ actress; having kids meant giving up your career; and making money meant a security blanket. (These ‘rules’, incidentally, would still apply in India.)

Then came along Jolie, who continues to get meaty roles well into her 30s; who has a committed long-term relationship with a handsome man (he’s Brad Pitt, for God’s sake) without the need of the crutch of marriage; who has adopted or borne six children without so much as a comma in her professional upward-pointed graph; who gives away millions of dollars to humanitarian causes every year and yet grows only richer each day. And despite it all – despite the unabashed interviews to the media about intimate topics ranging from cutting herself as a teenager, her 14 tattoos, past relationships, losing her mother to cancer, kissing her brother on stage, and her turbulent bond with her father – Jolie comes out unscathed and formidably respectable.

Having acted in nuanced, award-winning roles, from a spy to a sociopath, Jolie’s directorial debut, In the Land of Blood and Honey, has already won the Stanley Kramer Award and is a bold effort on a painfully sensitive issue in recent history, an effort that often left Jolie exhausted – she admitted to having had a ‘meltdown’ in the shower during the making of the film until found and comforted by Pitt.

It’s this very courageous fragility that makes Jolie a feminine icon. That she is a mere human, prone to folly, becomes incidental in the face of her tremendous strength in wilfully taking on the challenges she has. That she is beautiful becomes irrelevant when one considers the hugely complex choices she has made as a woman. Because, eventually, it takes more than strength and beauty to be an Angelina Jolie. It also takes the heroism to be fallible.