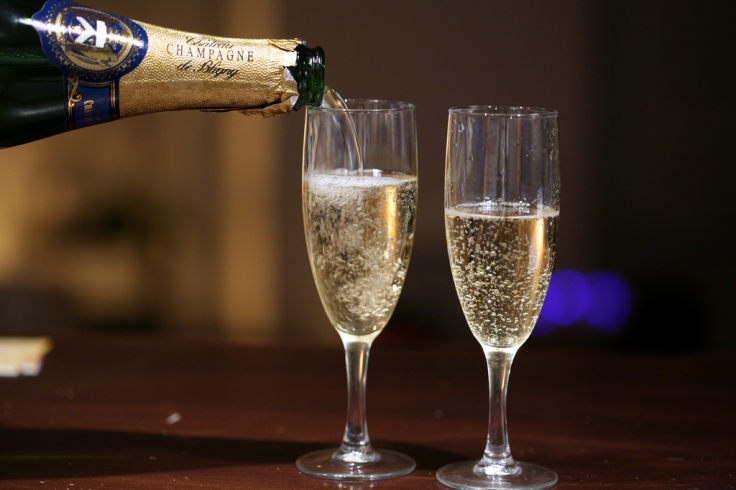 My first sip of one of the finest champagnes in the world, Armand de Brignac Rosé, did not really leave me enamoured, and I turned around and told the gentleman seated next to me just that. It was past 10 pm on a rainy Rajasthani evening, and we were sitting at 1135 AD, a fine-dining restaurant located inside the ramparts of Fort Amber in Jaipur.  Surrounded by silver, crystals, candles, flowers and mirrors, we’d just consumed four courses of delectable Indian cuisine, each paired with a different prestige cuvée champagne, and were just about to launch ourselves on dessert – zaffrani gulabi mewa kheer, shahi tukda and gulab jamuns.

The gentleman in question was Rajiv Singhal, ambassador of Champagne to India, on behalf of Comité Interprofessionnel du Vin de Champagne (CIVC). He didn’t respond to my spontaneous outburst; instead he waited until I had a bite of gulab jamun, and then took a sip of the award-winning product from the House of Cattier again. The very intensity and depth that had bothered me in the first sip, turned into veritable ambrosia this time around. I was taken aback – and floored. “I take my words back,” I said to Singhal. “This is an amazing champagne.”

But then Singhal didn’t need an occasional drinker like myself to tell him that. The Yale-economist-turned-wine-connoisseur had been saying this to me all day: champagne goes with everything. Even gulab jamun. Despite the copious amounts I consumed in Singhal’s company, there was no sign of a hangover or even any discomfort. But then, this was no ordinary wine we were talking about. These were some of the most expensive champagnes in the world, made under the most stringent conditions in the world’s most fertile vineyards. No wonder then, all I felt was very, very happy.

Grown over roughly 34,000 hectares of vineyards that lie about 150 kilometres to the east of Paris, spread across 319 villages, champagne comes from a region that enjoys a dual advantage when it comes to climate: there are both continental and oceanic influences. These ensure both sunny summers and frosty winters, and a steady supply of rainfall with no major fluctuations in temperature year after year. It’s as if Nature itself had conspired for the best bubbly to be born and bred to perfection. Besides the weather, the primarily chalk and limestone subsoil conditions too ensure the right quality of grapes best suited to champagne production – Chardonnay, Pinot Noir and Pinot Meunier.

The grape you savour most depends on your palate. Most champagne wines are a combination of the three varieties, with each grape adding its own special nuance. Chardonnay, for instance, contributes a light, effervescent quality, and comes with a soft, mineral flavour. When aged in oak, it develops vanilla, caramel or buttery aromas. Pinot Noir, perhaps the world’s most difficult-to-raise grape, adds strength, power and boldness, while Pinot Meunier provides roundness, body and fruitiness, and helps in ageing. Some champagnes are made from a single grape variety. It takes a few samples of each variety before one can pick one’s favourite. For instance, I rather enjoyed the lightness of Chardonnay, such as in the Ruinart blanc de blancs I tried over canapés earlier in the evening. (And ageing makes Chardonnay even better, I realised over a Nicolas Feuillatte 1996.)

Besides the grapes used, the real art of creating champagnes lies in the blending, which brings together wines of different aromatic and organoleptic qualities to create a harmony of notes. Not only different grapes, but also those harvested in different years may be used. The objective, according to the cellar masters, is to create a sense of balance “that does not exist in nature and could not exist without man’s intervention.” An ambitious goal, but one that has nonetheless been perfected over centuries of wine-making. Some wines are blended from tens of different wines, in various permutations dictated by the wine-maker’s creativity. Due to the practice of ‘reserving’ harvests every year, there may be more than 300 wines available at any one time to the wine-maker. There are so many variables involved, in fact, that it is hard to believe that wine-makers still manage to repeat their signature blends year after year.

Champagne wines that are made from grapes from only one exceptional year are called vintage, while blends are called non-vintage. Non-vintage wines need lesser ageing – from fifteen months to about four years – while vintages require a minimum of three years, going up to an unlimited number of years. The oldest champagnes in the world have recently been discovered at the site of a shipwreck near Finland – the bottles of Heidsieck, Juglar and Veuve Clicquot are estimated to be from the 1820s, and most are still good to drink.

Besides these, there are also rosé wines (the colour comes from the addition of Pinot Noir wine at the blending stage) and prestige cuvées, which are the top of the producer’s range. Some champagne houses also offer ‘blends of vintages’. According to informal champagne society rules, one must bring a vintage of a year that holds significance for the opposite party whenever one comes to the table with a deal to make. Do not get anyone’s birth-year wrong, however, unless it falls on the more flattering side of the calendar.

Each of the over 300 champagne houses has its own distinct style and, of course, its own story. For instance, an urban myth goes that champagne was reportedly ‘discovered’ in the late 17th century by a monk Dom Pérignon (now the most formidable name in champagne) who was the cellar master at his Benedictine abbey. Though he isn’t really the creator, he did contribute tremendously to the art of champagne-processing. In a lesser-known tale, the House of Bollinger, founded in 1829, was miraculously spared being burnt down around 1911, though a winery just thirty metres down the road didn’t make it.

Then there are the controversies. Five years ago, Frederic Rouzaud, the then newly appointed managing director of Louis Roederer, the 230-year-old champagne house that makes the iconic Cristal, made a derogatory comment about American rap artistes, who had inadvertently mass-marketed Cristal in their hip-hop songs and limo lifestyles. In the ensuing backlash, artistes such as Jay-Z, Beyonce, Rihanna and Jamie Foxx publicly announced turning to rival champagne brands like Armand de Brignac and Krug. Industry observers clucked their tongues at Rouzaud’s gaffe, saying the brand needed the rich, young clientele that rap artists brought in their wake, and not the other way around.

Besides who drinks it, when one drinks it is also a gradually expanding arena. Once considered a ‘celebration’ drink worthy only of being popped at wedding receptions, company mergers or birthday parties of the rich and spoilt, global wine audiences are now beginning to realise that there is really no time or cuisine that doesn’t warrant a bubbly. In Singhal’s enlightening company, I managed to put away a Piper-Heidsieck Brut and Taittinger prestige rosé along with batata vada and an afternoon coffee. We later had a Cristal with arhar dal and bharwan baingan, and a Laurent Perrier Grande Siecle with gatte ki curry and jeera chawal at dinner. Then came a saber-cut Pommery and a fantastic Veuve Clicquot Ponsardin with a breakfast of upma-sambar the next morning. And at no point did the taste-buds rebel.

Other classifications such as the grape variety or age can also help in pairing your glass with your plate. For instance, the blanc de blancs go well with lighter foods and aperitifs, while blanc de noirs, due to their stronger Noir grapes, go better with meats and seafood. Roses are good with poultry and game birds. Very heavy tomato-based sauces may clash with the acidity in the champagne, but the same quality makes brut and extra-dry champagne an excellent pairing for spicy Asian foods.

Then again, you could just toss the rules out the window and go with your own heart. When it comes to this multi-faceted swirl of bubbles, your own imagination is the only limit.