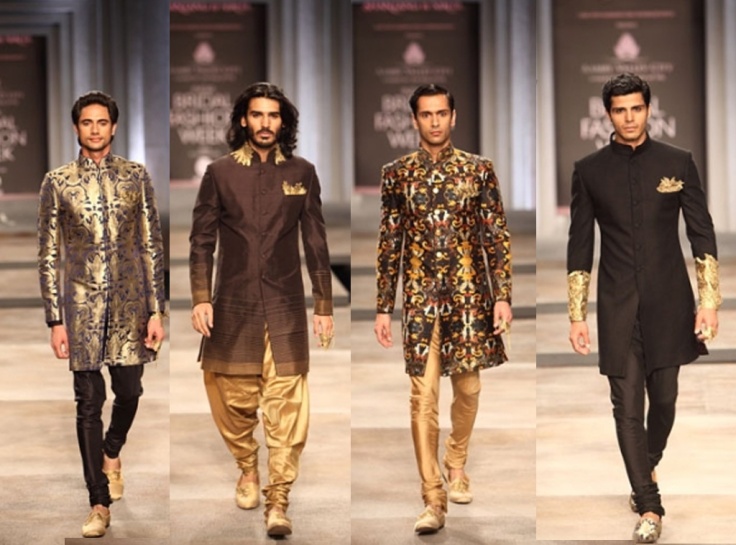 Designer Rohit Bal once said the male of the species is better looking than the female and the only reason it works the other way in humans is because the female spends so much time on her dress and make-up. Well, the race to look gorgeous is levelling out now between the two genders. From clothes to accessories and cosmetics, there seems to be no self-indulgent territory that the dandy brigade has left— well, virgin.

“It’s a demand and supply thing,” says Delhi-based image consultant Dilip Cherian. “Women are more conscious of the image factor of their men and are talking about it. Men have been picking up these signals in their eternal quest to please women and have started taking their appearance more seriously.”Whether it’s an embroidered designer shirt or pointy-toed boots, a glow-in-the-dark UV hair gel or the latest spa treatment, men now want a lion’s share of the style pie.

Clothes make the man
The desire to please their partner may lie tucked away in their genes, but talk to the new generation of perfectly groomed male yuppies and you’d think this newfound interest in style is yet another tool for power. Professional doesn’t get more personal than this. “It’s very important to look good, especially from a business perspective,” says L. Suren, a 26-year-old engineer-businessman in Chennai, flashing his Omega wristwatch. “People take you seriously if you wear brands and know the latest trends. It’s a statement.” For others, it’s a necessity. “I’m not too brand-conscious,” says Nakul Manchanda, the 25-year-old managing partner of a Delhi-based steel firm. “I just go for the basics, like my Versace glares.”

“There is a willingness to experiment with colour and innovative fabrics and the advertising industry has successfully translated this expression of individuality,” says Hemchand Javeri, president, Madura Garments (which manages Allen Solly, Louis Philippe and Van Heusen). He perceives a tangible change in male consumer awareness about brands, product categories and styles that will suit them. Whether it’s a clean-cut business suit or a casual T-shirt, men are increasingly careful about their image and what it says about them.Gone are the days of leggy female models posing seductively over a motorbike. Men are pretty enough to sell their own products now.

Gone too are the days when the best accessory was a femme fatale on your arm. The real man today has plenty of other, easier-to-obtain options. Luxury accessories have always seen greater spending in the male category, but their value to their owner has undergone a slight shift. “In the last few years, men have been taking their brands very seriously. It’s a matter of self-esteem and status,” says Vikramaditya Jetley, head of marketing for luxury watch brands Movado and Ebel, among others. It’s not just about functionality. From shoes to sunglasses, from pens to wallets and ties, it’s how a brand makes you feel about yourself that counts.

Image—V-image
Perhaps the most telling clues to this style awareness are the launches of FMen, an offshoot of Fashion TV, and the annual Castle India Men’s Fashion Fair. Designers Shantanu and Nikhil, who participated in the 2006 Men’s Fashion Fair in Bangalore two months ago, feel that greater availability will only generate to greater interest among men. Whereas Rajesh Pratap, whose menswear is to die for, says this reinvention of the menswear scene is happening after two decades of quiet. He attributes it to a more interesting phenomenon: “Gay men are coming out now so straight men need to look after themselves too!”

With so many sets of eyes on them, men now ask for clothes that suit their body type better, be it by colour, length or style, says designer Varun Bahl. “They want to be bold and assertive, and yet come across as sensitive and worldly.” Is it then only about market forces? There also seems to be a subtle change in the idea of masculinity itself; the term ‘macho’ seems to have taken softer, smoother, touchable undertones. And it is not just the well-travelled upper classes that are going for the makeover. “There is a 25 per cent upsurge in male image consciousness across all strata,” says Cherian, though in the higher socio-economic sections it would be closer to 50 per cent.

Market studies by apparel and personal grooming brands confirm the trend. With greater disposable income and awareness via the media, combined with greater access to both domestic and international brands, it is not altogether difficult to be clued in and well turned out.

My Fair Gentleman
Even hitherto ‘feminine’ concerns now have a huskier timbre. Such as the beauty industry. Spas and salons are finding it increasingly viable to go unisex. Pedicures and manicures rule the registers at parlours across the board, and facials are coming up closer and more personal. The Espace Spa in Noida offers a ‘paraffin foot therapy’ and a ‘Dead Sea facial’ as part of its pre-wedding packages for grooms. The Eros Intercontinental at Delhi offers a ‘whisky’ facial, using genuine Scotch whisky that is massaged into the skin and ‘helps in cell renewal’. Not very surprisingly, they’re giddy with the great response.

So great is the demand for rejuvenation massages that the Golden Palms Spa and Resort in Bangalore has 11 rooms for men versus just five for women. “Lots of corporate men come in on the weekends and give themselves up to us to relax them,” says spa in-charge Dr Prasida.

But you don’t have to be rich to be handsome. From low-budget to luxury cosmetic brands, the most market-savvy of them all know where the big booty lies, and have geared up for the ride. VLCC launched five men’s products in March this year, and “it’s not just a metrosexual thing,” says Ratin Mathur, VP marketing. Their beauty section has seen a growing demand for men’s services in the last three to five years, he says.

Shilpa Ajwani, national sales manager for Oriflame, attributes the interest to changing lifestyles, pollution, alcohol and stress: “This leads to premature ageing of skin and hair. That’s why even twentysomething men want extra grooming.” But men’s needs are different from women. They are not very patient with beauty care and look for quick results, says Sippy Jindal, product manager for H2O+. The packaging too needs to be neat and convenient.

But the shattering of the feminine beauty myth can’t be louder than in the fairness segment. Emami set a precedent early last year when they launched Fair and Handsome, a product that raised eyebrows while quickly flying off urban shelves. “Men have been liberated from using women’s fairness creams,” says brand manager, Sunil More. His sentiments found echo in the corridors of Hindustan Lever. “Our findings showed that a considerable percentage of the users of Fair & Lovely skin cream were men,” says Ashok Venkataramani, senior vice-president, a fact that precipitated the launch of their own male version in July this year.

But one would be mistaken in thinking it’s only a certain class of people in the cosmopolitan metros that follow the latest trends. With availability and exposure, small towns are quickly catching up, says fashion photographer Pomy Issar. “There are huge billboards of men in skimpy underwear everywhere you go in India now. Men have plenty of incentives to look after themselves.”

They’ve got the incentives and the intention. With the growing awareness and accessibility to the latest in personal grooming and style, the modern-day knight no longer need hide his face: he looks good and feels great. And if the smile of the woman by his side is anything to go by, something must be right.